Extreme golf (x-golf) has attracted a lot of fans in Europe and all around the world for the decades of its existence. While the world fans were playing on open plains, in woods, and industry objects or in night atmosphere of big cities, x-golf didn’t get much support or many fans in former Czechoslovakia.. The Czech Republic therefore became one of the last places in Europe, where x-golf was completely out of interest of sports fans.

However, The Czech Republic has already paid its debt – in a generous way.

“We are the last in Europe but the first in the World”.
Eventhough x-golf took a long time to find its way to the Czech lands, The Czech Republic is the first country in the World, where x-golf has been growing on the institutional and organizational level. It was necessary to define the rules of the game and competitions in the situation of the growing number of tournaments, matches and players. On 23rd January 2009 the Czech Extreme Golf Association (further only ČAEG) was established as a voluntary association of individuals and clubs. The Czech Republic has successfully brought x-golf into the family of worldwide sports by making the rules of the game, game order and supporting the development of junior as well as senior categories.

We are kindly inviting all players and non-players to the forgotten and new-found green sport in the open landscape of mountains, hills, meadows and fields. The real pure golf in terrain which suits it. Extreme golf.

Today's golf as we know it began in just such a natural environment. Certainly it was a great success if it continued to develop into the present form. Clubs were formed, and they built golf courses. But some things have been forgotten – such as probably the most attractive on golf - the living landscape. That is where extreme golfers look for their courses. Although extreme golf might seem like a new/young/extreme discipline at first glance, it's in fact a kind of return to the roots of golf.

Extreme Golf league (EEG) is an original game order, created for the needs of the Czech Association of Extreme Golf (hereinafter ČAEG).

EEG is the highest competition in extreme golf in the Czech Republic. It is an annual competition of individuals and clubs and is open to all players (male and female) from the age of 8 years.

Each player takes part in the tournaments at their own risk.

Competition organized by the EEG :

Extreme golf league includes all domestic competitions according to ČAEG tournament calendar. Tournaments are divided into three categories, differing in point value from category A to category C.

Beginning of registration :
5 days before the tournament (Monday) at 19.00 CET on ČAEG website (electronic registration)

End of registration :
the day before the tournament (Friday) at 19.00 CET

Maximum number of players is 48.

Position/points (common national ranking) depending on the number of participants : 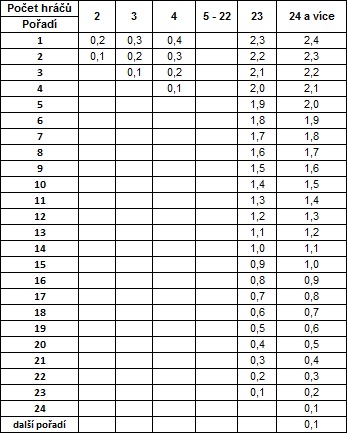 Rankings for the season are held in the following categories :
Come on to the MiniMatch

Official tournament of the lowest category tailored to families, friends, holiday players ... It can be held by everyone who participated in a league tournament in the past.

It's morning, the sun is rising and the day begins. Talk to friends or family and set out...

You will only need :

...set out to whatever place appeals to you and enjoy the relaxing free game, opposite to “conservative” golf game – the Extreme Golf.

It is recommendable to chose the courses in order to be able to find the shot balls, in area where there is nothing to break, no one to hurt and where it is pleasant for your soul and eye. We recommend meadows, parks, pastures and slopes. To conquer one hole you have a maximum of 8 shots. Decide on how many holes you are going to play and GO AHEAD!.

If you send us photos, results and a brief report, we will be very pleased to put your game on our blog.

If you inform us in advance (at least three days), and it may be, depending on the parameters, counted in the EEG league as a MiniMatch (tournament cat.C). Tournaments are open to the general public. It's no exception that the players who participate in MiniMatches are holding a golf club in their hands for the first time...

If you have any further questions, don't hesitate and contact us...
e-mail - info@caeg.cz